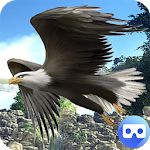 Attention: For BEST play experience use any joystick or wireless gamepad or controller (with gamepad/controller you can speed up, you can shoot sticks and knock down bags)


To select a world and a mission, you need to visually point and align the white dot with your choice

For best play experience, using a wireless controller, joystick or gamepad is advised!

You can now speed up using your Bluetooth controller / wireless gamepad, joystick

Eaglivion VR is a beautiful vr game. Eaglivion VR is designed as well for vr games joystick categories. You will look and experience your play through the eyes of an eagle; this bird flying vr game has missions where you being a bird, must successfully accomplish fishing vr and hunting vr activities, as well as the racing vr simulation mission allows you to race with other birds while going though checkpoints and collecting feathers. There are many virtual reality fun tasks and missions in this best vr game, Eaglivion VR is full of addicting and challenging missions.

Eaglivion is a VR game with two different worlds with 3 game modes in each. Designed for vr games category. Among VR apps Eaglivion VR stands out tall, for its premium performance and graphics.

For best performance, using google cardboard or box vr is recommended
This vr games app will not disappoint you, so all you have to do is just give it a try and you will enjoy the quality vr gaming time.

This is one of the best virtual reality games for VR glasses, VR cardboard and VR headsets. You will get premium quality virtual reality flying, racing, hunting, fishing experience.

Love the graphics but those without a Bluetooth remote and a trigger button in the vr can skip this app.

Does not support wired or bluetooth headphones? That's an achievement.

Top notch VR experience, absolutely loved the game. I was so hooked to the game and played like a little kid knocking down those bags, catching fish in a virtual environment. Thank you, developer. Graphics are so beautiful, and controls are super, hats off!

This is the future of VR gaming, amazing app. I can't stop playing. Thank you for this app!